Given the number of Non-GEO HTS constellations announced, from early launch, full production, and those in early development, it is safe to say the skies will be filling up fast with more satellite capacity than ever before. On the ground, development of next-generation, electronically-steered terminals continues with announcements such by Kymeta, Phasor, and OmniAccess among others. Given this, all signs indicate that electronically-steered antennas (ESAs), which will inherently decrease the number of moving parts, are key to the future of satcom. However, delays are quite common, from Kymeta requiring 5 years to ship their first product, and Phasor postponing their ESA deployment, to name just a few.

Meanwhile, mechanically-steered antennas (MSAs) are on the market now, with developed supply chains and partnerships, doing the job with a host of moving parts. Given that technology development can be slow and expensive, with massive changes to production scale necessary to target new markets, one must again consider, what does the future of satellite communications look like, should ESAs continue to be delayed? 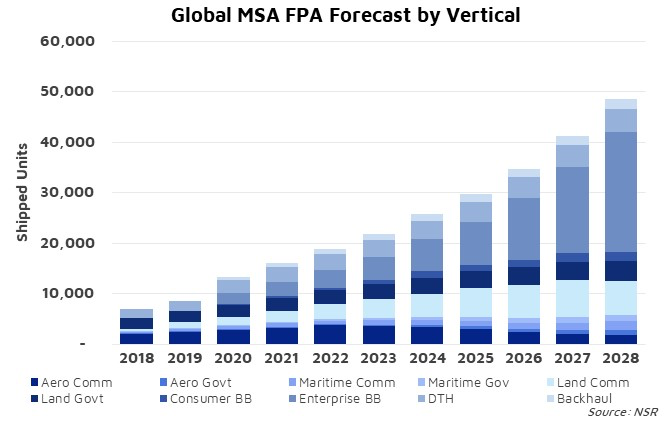 According to NSR’s Flat Panel Satellite Antennas, 4th Edition,  annual shipments of mechanically-steered antennas (MSA) FPAs will grow to over 48,000 units by 2028, with over 7,000 shipped last year. MSAs are forecasted to represent only 3% of all future shipped FPAs, yet they represent 95% of the market today. In fact, despite ESA development, MSAs are expected to retain leadership in key verticals. Even as investment and excitement for ESAs continue to grow, it is vital to understand where and why MSAs will dominate, in order to cut through the hype and strategize around potential technology delays.

As NSR previously published, MSAs will be responsible for 76% of shipped FPAs for commercial aviation by 2028. Pricing, reliability, and an established (and growing) supply chain are the main driving factors. Simply put, commercial aeronautical is gaining momentum, and while ESAs could bring new capabilities and even lower profiles, new testing, certification, and changes to the installation process are expensive and time-consuming. GEO HTS is the preferred frequency in this market, suitably capable of connection via MSA terminals.

For reasons of security, ruggedness, and legacy programs, government mobility markets will favor MSAs, at 51% of all shipped FPAs by 2028. While not remarkable at first glance, a closer look reveals that NSR’s forecasts assume MSAs will dominate government aeronautical, at 95%, hold leadership in maritime, at 60%, and trail behind in land-mobile, at 44% of all FPAs shipped by end of forecast. Despite terminal troubles of mismatched network and equipment compatibility, pricing, and a growing need for greater-capability and multi-frequency equipment, MSAs have the longest heritage with government and military customers. Advanced capabilities are desired, but reliability is required.

Wireless backhaul is a difficult market for FPAs to target. High throughput requirements, professional installation of equipment, and strong competition from parabolic antennas, render the main FPA value propositions moot. When FPAs do successfully cater to this market, it will be via high-performing MSAs delivering GEO HTS capacity. As such, NSR forecasts over 90% of FPA shipped units in this vertical to be mechanically-steered by 2028.

Electronically-steered antennas are expected to expand satcom into the largest, untapped, addressable markets, such as the connected car and consumer broadband. Without them, the volume of expected FPAs will be cut by 97% by 2028. However, mechanically-steered systems are on the market today, with strong footholds with government mobility and aeronautical markets, two of the highest revenue opportunities for satcom equipment. Given the expected delays of constellations and ESA product launch, let’s not forget about MSAs, which, with all their moving parts, will keep the upper hand in many satcom verticals going forward.