When the term “flat panel antenna” (FPA) is mentioned, most envision a completely flat, non-moving piece of communications technology. These systems, specifically electronically-steered antennas (ESAs), capable of faster tracking and pointing than parabolic ones, are seen as an impending necessity for satcom, especially given the soon-to-be full skies of LEO constellations. Interest and development in this technology has grown significantly in recent years, from Kymeta shipping the first commercial ESAs in 2017 to large contracts signed, pending product release.

However, ESA technology is still under-developed, mostly unavailable, expensive to engineer and suffering numerous delays. Currently, only 4 manufacturers (Kymeta, hiSky, SatCube, and SatPro) have ESAs for broadband-via-satellite available on the market, and given the importance of this technology for LEO networks, one wonders just when will this technology take off, and what happens if it does not? 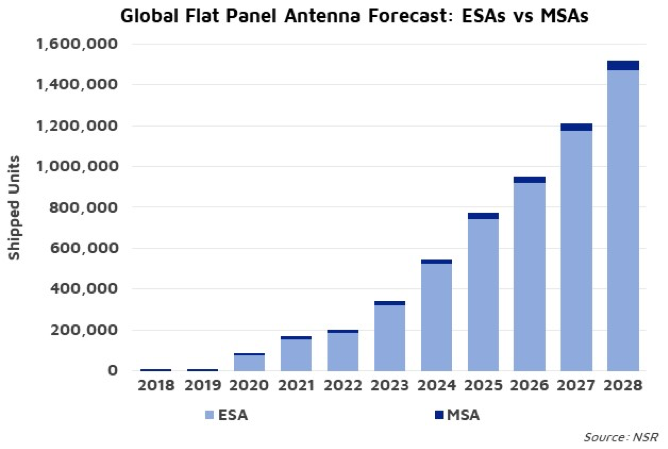 NSR’s Flat Panel Satellite Antennas, 4th Edition report forecasts the market to transition strongly after 2020, with ESAs accounting for 97% of FPAs shipped in 2028. While mechanically-steered antennas (MSAs) currently dominate the FPA market, at 95.5% of shipped units, non-GEO networks, competition, and improved technology are expected to strongly pivot market take-up once LEO constellations are launched and operational. However, MSAs have begun to make successful inroads, and in some cases are expected to continue to provide competition to ESAs even after the technology becomes more available.

In both commercial and government sectors, MSAs are expected to retain market dominance, responsible for 76% and 95% of shipped units in 2028, respectively. The main reason is reliability, with government customers especially expected to continue favoring the technology with more heritage. Testing and certification for aeronautical equipment is laborious, lengthy, and expensive, providing a time delay and significant barrier to entry for novel ESA equipment. Additionally, value chain dynamics, partnerships, and norms regarding installation costs and timing have created momentum for MSAs and switching technologies will result in players facing market resistance, slowing ESA adoption.

Land-mobile markets remain split, with MSAs retaining adoption through existing and expected legacy programs and platforms. Government users, torn between reliability, ruggedness, and next-generation capability, will only slightly favor ESAs at 55% of shipped units by 2028. Just as with Aero, catering to land-mobile government users will require more time and investment for technology improvement, testing, and certification, prolonging legacy MSA dominance. Commercially, the main opportunity currently is for serving the connected train, which is less concerned with a sophisticated ESA solution, favouring ruggedness and reliability. However, connected buses and trains seek a sleek system, not only integrated into the vehicle, but into the business model. As such, NSR expects 82% of the commercial opportunity in land-mobile to be served by ESAs by 2028.

Fixed applications are the real volume play for future FPA manufacturers, given the size of the consumer broadband addressable market, and the potential service revenues to be made through non-GEO constellations. However, these customers are among the most price and performance-sensitive, with both seen as major obstacles to FPA take-up. Enterprise and Backhaul customers, especially, expect such high-performing SLAs that current FPAs are unable to compete, putting pressure on those being developed. Consumer broadband, unaccustomed to paying greatly for equipment, are unlikely to adopt FPAs until scale increases and prices dramatically decrease. However, as FPA technology and production processes improve, NSR expects ESAs to break into most fixed applications, standing out by providing non-GEO capacity, accounting for 98% of shipped FPAs after 2021.

Currently, FPAs serve a tiny portion of the satcom market, catering to niche markets and applications calling for low-profile equipment. Mechanically-steered equipment serves these customers now. However, next-generation networks require next-generation capabilities. Technology development is slow, expensive, and the usual delay between capability and marketability will push timelines even further to the right. While several manufacturers are working on this problem, most are not expected to have product launched until after 2020. Should there be further delay, operators will likely experience a logjam, where non-GEO capacity is not able to be delivered efficiently or sufficiently.