November 15, 2020 by Dallas Kasaboski | More from this Analyst | Profile

In the world of racing, positioning is key. Some adopt an early lead, hoping to break away from the pack. Others choose a more moderate approach, gauging competition and making moves over the race.

In the business of Earth Observation, positioning is just as key. While the industry is well-established, with imagery setting the pace and breaking away as the front-runner, a non-imagery market is emerging.

Featuring datasets including radio occultation, Greenhouse gas emissions, and radio frequency monitoring, players such as GHGSat, Kleos Space, and Orbital Sidekick, among many others, are aiming to provide data and derived products for Earth Observation.

However, given the advanced pace and established customer channels set by optical and SAR, does this emerging market stand a chance to get a good position in the market? Will non-imagery break away or simply get lost in the pack? 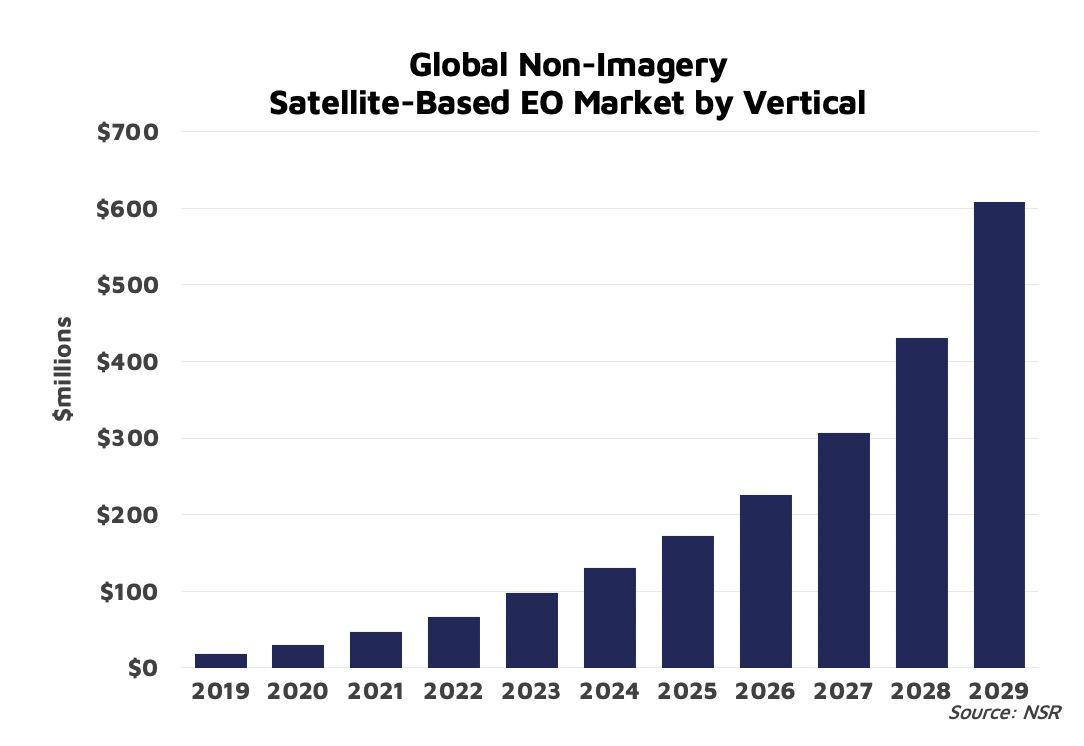 NSR’s Satellite-Based Earth Observation, 12th Edition report projects the annual revenue from the sale of non-imagery data and derived products for EO to grow from $18 million to $608 million between 2019-2029, at a sizeable 42% CAGR. Driven by strong government support, NSR expects non-imagery players to initially focus on data for gov/mil customers and, if able to match the pace and make the right moves, slowly diversify into all other verticals over the next decade.

The emergence of non-imagery is driven by the development of technology, and the pace of demand set in the EO market. Previously, most of the technology required for non-imagery datasets was focused on large, single satellites, such as Europe’s Sentinel-6, slated to launch later this month. Advancements in satellite manufacturing and launch have helped increase commercial access to these payloads, lowering the barrier to entry. As of today, over 130 non-imagery EO satellites have been announced to launch by 2029. That is roughly a dozen a year, not bad for an emerging market.

At the same time, ground networks and cloud technology are changing how EO data is bought and sold, redefining the capabilities of EO solutions. Ever-growing data supply has prompted satellite operators to develop volume-based access via subscriptions and online portals, many of which powered by Amazon, Google, and Microsoft.

For the overall industry, these changes are driving EO forward, setting a faster pace from data acquisition to delivery, and more efficiently integrating volume and variety of data and solutions into a company’s workflow. Earth Observation is shifting from a traditionally focused, project-based industry to a more subscription, ongoing, commercially widespread industry.

For non-imagery to succeed, players in this space must understand and adapt to the technology and pace that optical and SAR are setting for the market.

Generally, government & military customers drive the majority of revenues, owing to larger, more established budgets, longstanding relationships, and a strong hunger for data and insights. Indeed, much of the early support for non-imagery has come from gov/mil, such as the NRO’s awards to HawkEye 360 and HySpecIQ, NOAA’s Commercial Weather Data Pilot, and more recent announcements. NSR expects this prevalence to continue, with government and military controlling 68% of all non-imagery revenues by 2029. 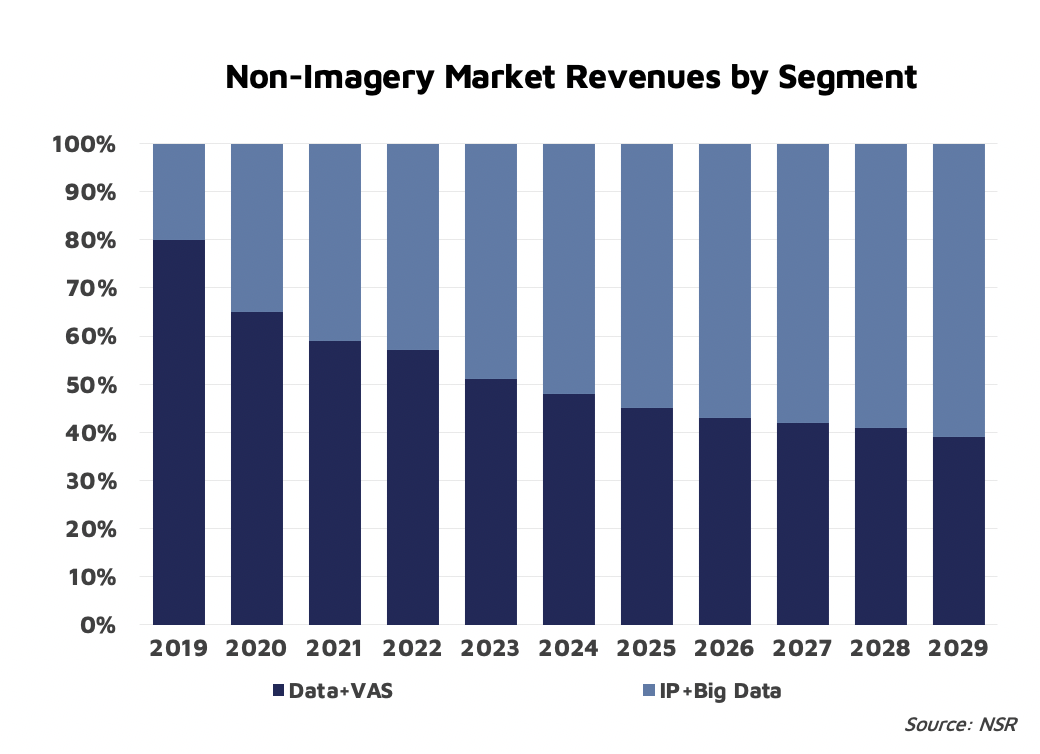 Furthermore, EO’s shift to subscriptions, monitoring, and insights-over-data necessitate that newcomers to this market demonstrate strong inherent value of their data, through its uniqueness, revisit, resolution, or all of the above. Over time, as the uniqueness of the data becomes diluted through supply and competition, players are expected to create more value by shifting toward downstream, insight-driven solutions. As such, NSR forecasts market share from non-imagery Information Products & Big Data analytics to shift from 20% to 61% of global revenues between 2019 & 2029.

Non-imagery is an emerging market, facing the same funding, market awareness, and technological challenges inherent in any satellite-based industry. However, given the resiliency of EO, and the growing demand across all verticals, non-imagery players may be able to learn and benefit from the established market. Just as a racer may draft the front-runner until it is time to make their move, non-imagery players have an opportunity to learn what does and does not work, standardize pricing and offerings, and avoid data commoditization, if they can keep pace.