Following on the footsteps of Skynet-6A reaching Preliminary Design Review (PDR), a critical step towards its eventual launch in 2025, the Gov & Mil SATCOM sector is entering into the next-phase of sovereign military SATCOM systems. Built in the age of cyber-awareness, the proliferation of lower-cost RF jamming technology, and the ongoing requirements to move more data from more sensors to more places, these next-generation satellites are starting to catch-up to their commercial counterparts. Alongside other programs such as the U.S. WGS-11 satellite, MILSATCOM networks are leveraging commercial hardware to deliver military-tailored solutions. They both will deliver new capabilities to their respective end-user base. 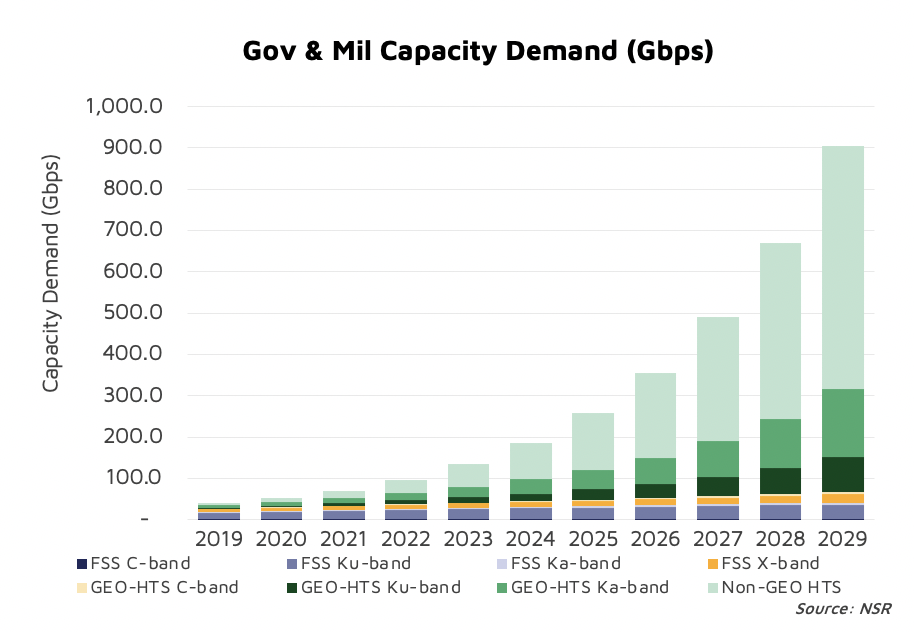 Looking specifically at NSR’s Government and Military Satellite Communications, 17th Edition study, NSR tracks the demand on commercial systems by Government & Military End-users – with upwards of 900 Gbps of traffic expected by 2029. Moreover, the introduction of Non-GEO HTS systems from the likes of SpaceX Starlink, Telesat’s LEO Program, Amazon Kuiper, OneWeb, and others are all going to require a complex interaction between terminals, and the satellite networks. This new operating paradigm presents new challenges for Gov/Mil End-users, with complex operational requirements around terminal roaming and other network management functions – again, an area where commercial markets can provide an example to follow.

My NSR colleague Lluc Palerm said it best in his Bottom Line Focused on the Commercial Ground Segment, “The industry was already naturally adopting virtualization and the cloud, … these tools will be essential to manage the scale and complexity of VHTS, Software Defined Satellites and constellations, in an ecosystem ruled by the standardized service orchestration defined in 5G.”

The same is true for MILSATCOM networks – they are no longer operating in a vacuum, and terminals instead need to be managed, monitored, provisioned, and controlled in a complex operational environment. More than that, current CONOPS are giving way to highly flexible interaction between MILSATCOM and COMSATCOM – all to the benefit of the overall robustness, reliability, and resiliency of Gov/Mil End-Users. Overall, Gov/Mil and Commercial markets are quickly starting to appear more similar than they have in years – introducing “commercial best practices” across the value-chain of SATCOM operations.

Using Data from NSR’s Data Portal highlights yet another trend – Gov/Mil Managed Services Terminal Equipment Revenues are likely to remain stable over the next 5 years, while commercial customers face the 2020 “COVID Impact” and a subsequent recovery to 2023. While this data does not capture the revenues spent on terminal acquisition programs Gov & Mil customers have to acquire terminals to use on their own MILSATCOM networks, or where the Government acts as a ‘service provider’ under a bulk-leasing/transponded capacity model, it highlights a key trend – commercial markets are rapidly acquiring new terminals (and subsequently capabilities), expanding their ability to leverage best-of-breed capacity and network management functions. Overall, facing the burden of extensive deployed Gov/Mil terminal infrastructure and likely budget constraints imposed by COVID-19 relief/response through 2023+ building the “Gov/Mil Network of Tomorrow” is going to require a strong focus on an equally-important segment of SATCOM Networks – The Ground Infrastructure.

Just as NSR discussed in Jan 2020, next-gen MILSATCOM systems are still unlikely to match the total throughput of current-gen ‘best of breed’ commercial satellites. Instead, Gov & Mil End-users will leverage a combination of MILSATCOM and COMSATCOM capacity through an integrated user-experience. Buzz-words like “Flexible” and “Enterprise” are key indicators of a critical change in thinking amongst the MILSATCOM community – Day-0 integration with commercial networks. For that to happen, terminals matter. A lot. This is also another area where Gov/Mil End-users can look towards commercial markets for inspiration – where mobility customers already enjoy robust roaming capabilities between various satellites and sophisticated terminals to enable multi-band, multi-orbit architectures.

For more insights on the Terminal Paradigm in Gov & Mil Markets be sure to sign-up for an upcoming webinar NSR is moderating, sponsored by Mission Microwave on February 18th on “Trends and Innovations in Transportable SATCOM Ground Terminals”.