Home > The Bottom Line > What if LEO Constellations Fail?

What if LEO Constellations Fail?

August 20, 2019 by Dallas Kasaboski | More from this Analyst | Profile

OneWeb, arguably the leading HTS constellation, has seen its investors Maxar and Softbank recently write down and declare an impairment of its investments to the tune of 50% of the money it poured into the venture.  Could this be just little more than a bump on the road? Constellations have forced the entire industry onto the same superhighway so any step sideways or back could have a huge impact on the way forward for the whole business. 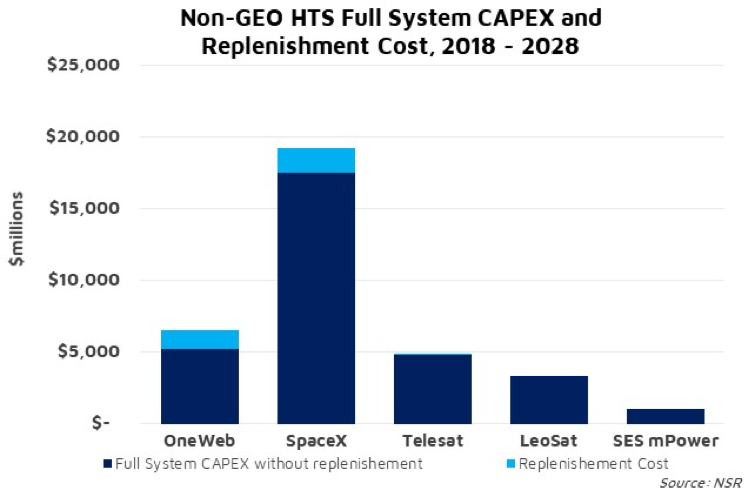 NSR’s Satellite Constellations: A Critical Analysis, 2nd Edition analyzes the impact of constellations throughout the industry’s value and supply chains. Several scenarios are presented, focused on the deployment of satellites over the next ten years. Earlier this summer, NSR discussed that non-GEO HTS capacity and service revenues are expected to account for only 14% of the entire HTS business, with GEO-HTS exceeding $47B in annual revenues by 2028. Therefore, even in the most pessimistic scenario, with no constellation fully launching and generating revenue, HTS revenues will thrive, generated mainly thanks to GEO-HTS fleets.

However, the surrounding satellite ecosystem would not be so lucky, suffering in many ways. First, the loss of effort and investment. Second, the lower potential revenue from new applications and services, and third, the additional struggle to recover and redirect the industry in order to deal with a satellite industry bereft of constellations.

Taking a more practical approach, NSR’s report models three scenarios, all assuming that at least some constellations are launched and begin revenue generation. In the Base Scenario, over 4,000 Non-GEO HTS satellites are forecasted to launch by 2028, from OneWeb, SpaceX, Telesat, LeoSat, Amazon, and SES. The analysis of manufacturing, launch, ground infrastructure, and insurance CAPEX for each player leads to an excess of $37B cumulatively by the end of the next decade.

While much of satellite manufacturing for constellations is expected to be done in-house, thus subtracting from the commercial opportunity, there are numerous players throughout this supply chain. System integrators, subsystem manufacturers, component manufacturers, material and hardware suppliers, players such as SSTL, GomSpace, NanoRacks and many others rely on the changing paradigm of constellations for future business.

According to the NSR’s Satellite Constellations analysis, manufacturing represents 35% of total constellation CAPEX from the above players, to reach roughly $13B by 2028.

With 12 new dedicated smallsat launchers anticipated to first launch by 2020, and an industry forecast to generate $2.2B in revenue over the next ten years, the launch sector has much to gain by catering to constellations of small satellites.

While some players, such as SpaceX, will launch internally, and offer dedicated rideshare programs, thus generally maintaining the status quo, the launch of satellites for constellations is expected to account for 28% of the total constellation CAPEX.

Electronically-steered flat panel antennas, advanced modems and gateways, and improved ground network design are all necessary for closing the Non-GEO HTS business case. Currently, 18 out of the 23 flat panel antenna manufacturers are working on equipment for LEO capacity and service. Without constellations, the forecast for FPA sales remains low, only representing 3% of the total business. NSR’s analysis concludes that the ground infrastructure amounts to 34%, $13B, of the total constellation CAPEX.

Billions of dollars have been invested in the key prospective satellite constellation players and programs. Billions more toward the development of technology, networks, and supply chain logistics necessary to make constellations a reality. It is the ultimate irony that constellations, arising out of a desire to create a more agile satellite business ecosystem, have created such industrial momentum in their development; and wild expectations that come from such large projects.

While not “too big to fail”, the success of constellations remains to be seen, and given the impending industrial inflection point, now more than ever, bets should be hedged in order to more easily adapt to the “new normal”, whatever that ends up being.