To bridge the digital divide. To connect the unconnected. Here lies the dream of satellite HTS constellations.

With more than half the planet currently unconnected, the addressable market and potential revenues look enormous. Thus, the race to space, with operators chasing this opportunity, driven by the belief that Non-GEO HTS, specifically LEO constellations, will be able to provide unprecedented global coverage and market penetration at significantly lower price per bit. Excitement is rampant, spurring industry-wide developments, such as assembly line-like satellite manufacturing, more competitive launch options, and even unexpected incumbents.

However, to date, only 2 operators have begun launching, with service not set to commence for another few years at the earliest. End-user terminals do not exist and are expected to lag behind satellite deployment. Customer channels, landing rights, and spectrum allocation remain serious, and unresolved, obstacles.

Given the amount of funding, at least $4 billion in committed investment and capital estimated by NSR, and efforts invested, coupled with these challenges, the industry should be asking, “Are we sure the future of satcom lies in LEO constellations? Can they really connect the connected, or are we all making a leap of faith?” 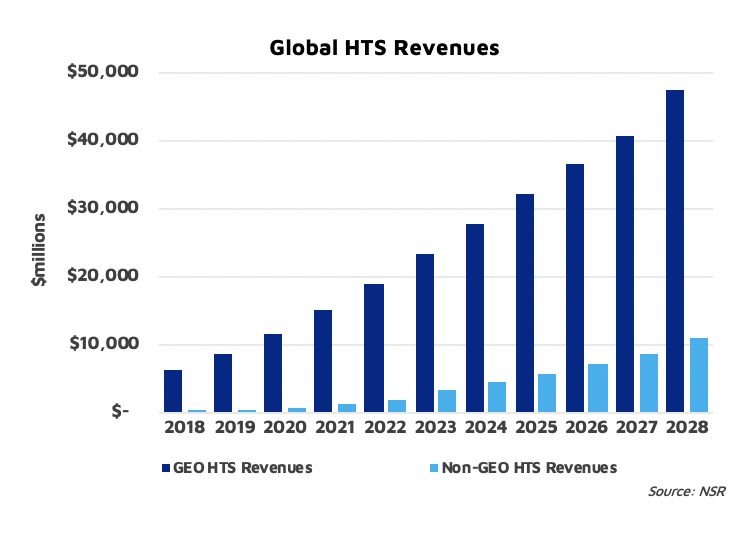 NSR’s Satellite Constellations: A Critical Assessment, 2nd Edition report forecasts the cumulative revenue opportunity for Non-GEO HTS capacity and service will amount to $43.6B, between 2018 and 2028. The Consumer and Enterprise Broadband Access segments drive the forecast, responsible for 79% of these revenues.

However, despite the potential of LEO constellations, NSR estimates that only 14% of the total HTS satcom market will be served by Non-GEO by 2028. To put it another way, Non-GEO HTS revenues will be 4x smaller than GEO, the majority of the addressable market will not be captured by Non-GEO, and the dream begins to look more like a financial nightmare.

Primarily, the driving force behind constellations is the belief that not only is the entire telecom business addressable by satellite, but that these future networks will greatly expand the addressable market. In short, virtually every person who could use these services, will be served by Non-GEO HTS.   NSR heard from one large LEO HTS constellation player that the entire telecom spending ecosystem was “in play” for addressable business, and a quick top-down estimate of penetration of this market yielded a large LEO revenue play.   Suffice it to say, this top-down logic could be met with a heavy dose of skepticism.

In reality, there are reasons why satellite has always been a niche market. Terrestrial services have established vendors, customers, equipment, and infrastructure, and while the satellite industry is excited about reaching 21 Tbps of global capacity by 2028 for Non-GEO HTS, people are signing up for Google Fiber and getting Gbps to their homes, today.  And those that remain unconnected globally most often present challenges from an ability to pay standpoint, further limiting the potential for classic B2C access distribution.

Next, NSR believes that, despite the potential for global coverage, constellations will face severe challenges in reaching customers. End-user terminals, flat panel antennas (FPAs), necessary for delivering Non-GEO HTS, are in development, but expected to remain expensive, with little incentive on manufacturers to lower prices. Securing landing rights in all target markets also represents a sizable challenge since LEOs will compete against incumbents in all markets, which is not necessarily an easy battle to fight.

Pricing pressure on Non-GEO HTS capacity and service will also likely force a LEO to race to the bottom to compete with GEO and other constellation players, limiting the revenue opportunity unless the subscription base expands dramatically.

Of course, not all is doom and gloom for satellite constellations. Innovations throughout the value chain have made mass production and launch of satellites easier, though not “easy”, nor “cheap”. Partnerships and technology development for FPAs have increased greatly in recent years, with over 20 manufacturers now on the market.   Access to space has also never been as open as today, with launch costs declining as more options are available for constellation players.

The excitement for satellite constellations shows no sign of slowing down, especially due to the efforts of notable industry champions such as Greg Wyler, Elon Musk, and now Jeff Bezos. However, realizing the dream of connecting the unconnected is more than building a dam of capacity in the sky. There are clear obstacles regarding CAPEX costs, launch delays, under-developed terminal equipment, and difficult to establish customer channels and pricing that have to be overcome to realize it.

To deny the risks, give in to the hype and excitement of LEOs, and believe that “if you build it, they will come”, is not charting a clear, strategic path to success, but making a leap of faith.