March 8, 2021 by Vivek Suresh Prasad | More from this Analyst | Profile

Internet access is an integral part of the human necessity, owing to its immense impact on social and economic developments in a region or community. However, approx. 50% of the world’s population still do not have Internet access, creating a greater digital divide across regions. This inequality is significant between developing and developed regions, where World Bank data shows only 35% of population in developing countries have Internet access versus 80% in developed countries. It is estimated that Internet access to 75% of population in all developing countries will cumulatively add USD $2 Trillion to GDP and 140 Million jobs. The Broadband Commission (ITU) has set up multiple worldwide targets, with greater focus on unserved regions, to achieve 75% Internet penetration worldwide by 2025. While importance of Internet access is undeniable, the challenges to upthrust Internet penetration remain many.

Satellite-based Internet service must be a major driver in addressing the targeted Internet penetration as it offers ubiquitous, instant infrastructure and a cost-effective platform compared to terrestrial alternatives in challenging topologies. According to NSR’s VSAT & Broadband Satellite Markets (VBSM19), 19th Edition report, the total addressable market for consumer broadband service is 434+ million households with Asia, Middle East/Africa and Latin American regions contributing 88% of the total opportunity. Most players in the Satellite industry target this market with plans to add massive amounts of satellite capacity in the coming years, such as SpaceX, Amazon, ViaSat, Hughes, Telesat, OneWeb and others. But the major challenge that remains is pricing, and it considerably shrinks the total addressable market – because most users in developing countries are extremely price sensitive. ViaSat’s average revenue per site per month is close to $99, SpaceX offers Starlink service during beta-testing at $99 per month, terminal cost ranges from $300-$400 for GEO-based services and >$2,000 (without subsidy) for Non-GEO services. High service and equipment costs have led to relatively low market penetration in emerging economies given low disposable income levels. Costs have decreased over time but are still not at the level that renders affordability to many households and individuals.

Community Wi-Fi (or Wi-Fi Hotspots) is one business model gaining momentum by addressing these pricing challenges. As it is a bandwidth sharing approach, the total cost of usage for an end-user drops significantly- with pay-per-usage or cheaper subscription packages & no direct equipment costs, and at the same time service providers generate 2x-3x (or more) revenue per site compared to a typical direct-to-premises site. The business model is witnessing success across emerging and remote regions, with examples of major deployments:

According to NSR’s VBSM19 report, cumulative Wi-Fi Hotspot service revenue will grow from mere $182 million in 2019 to $7.8 billion by 2029 at astounding 45.7% CAGR. Asia is estimated to grow at the highest pace with a CAGR of 71.6%. Middle East/Africa (with Africa in focus) is estimated to witness maximum penetration post 2023-2024 – with added service influx from GEO & Non-GEO players, vectoring the regional opportunity to $3.4 billion by 2029. Latin American service revenues are forecasted to multiply by >10x during 2019-2029 – owing to ongoing and future deployments. North America and Europe also show potential by  contributing 22% of global Community Wi-Fi service revenues during 2019-2029. 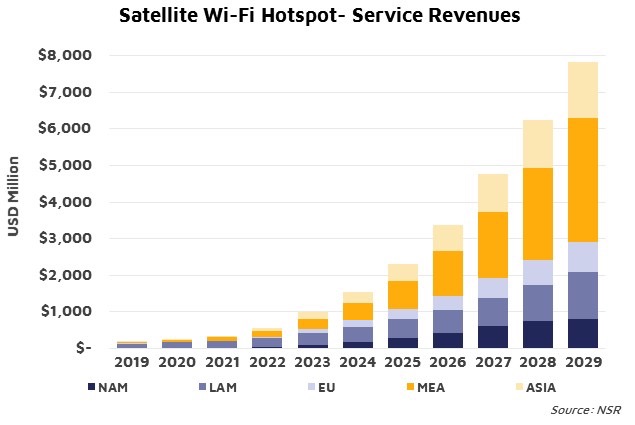 Community Wi-Fi (or hotspots) is a win-win approach for both service providers (higher revenue per site) and end-users (lower usage cost), addressing the key challenges of digital inequalities in developing countries, i.e., service and equipment pricing. The business model is not suitable for data or bandwidth-hungry end users as it is a shared bandwidth approach. But it is very suitable for regions/communities with lower per capita income, and most unconnected population/households belong to this market section. Notably, most Wi-Fi Hotspots deployed sites in remote or developing regions witness 250-500 devices using the network regularly – hence it can be stated that addressability of the model to bridging the digital divide is greater through this approach.

Overall, Community Wi-Fi presents a cumulative service revenue opportunity of $28.4 billion during 2019-2029 and is an answer to many digital divide challenges, especially in price sensitive and challenging topologies.