Home > The Bottom Line > Fixed VSAT: When will Price Elasticity be Activated?

Fixed VSAT: When will Price Elasticity be Activated?

January 27, 2020 by Vivek Suresh Prasad | More from this Analyst | Profile

It’s no secret that satellite operators & service providers are in a whirl of turbulence. The assertion is evident from year-on-year published toplines by major players (Eutelsat, Intelsat, SES, Telesat Canada), indicating either stalled growth or revenue decline. Despite this trend, NSR expects promising opportunities in the fixed VSAT segment in its VSAT & Broadband Satellite, 18th Edition (VBSM18) report and stated the satellite industry is merely scratching the surface of opportunity with <1% service penetration for the consumer broadband vertical.

Clearly, there is a gap between the two arguments; i.e. the opportunity sphere and revenue outcome, and the strategic imperative to fill the gap with the right VSAT strategy focusing on product, pricing and penetration dimensions.  The timeline of this execution is critical for stakeholders, and it has to resonate with the timeline when the industry unlocks its price elasticities. Delays in achieving competitive pricing using affordable space & ground systems, efficient supply chain, efficient networks and reliable solutions may likely lead to a situation similar to the Smartphone market – Nokia effect.

Fixed VSAT is one of the largest space industry market segments with a cumulative opportunity of USD $189 billion during 2018-2028 timeframe, as stated in NSR’s VBSM18 report. Multiple developments are ongoing to achieve an affordable, seamless and reliable solution with the intension of pushing growth on an accelerated trajectory such as non-GEO constellations – SpaceX, OneWeb, Telesat, Amazon; very high-throughput satellites – ViaSat, EchoStar; ground segment developments and vertical integration/consolidation. These developments are most likely to shape the future of the VSAT market in the next decade, with the in-service timelines of upcoming innovations noted below:

NSR analyzed the potential success of the players, especially in the non-GEO category, and factored-in multiple possibilities in its analysis. NSR estimates the period between 2021-2024 will be critical for the fixed VSAT market across regions and applications for unlocking market elasticities. The greater potential regions – LAM, MEA & ASIA will witness a transformational jump of >10% in their growth rates during this period. The peak growth rates in MEA & ASIA is likely to be delayed with respect to the LAM region due to likely delays in service penetration, competitive price propagation and affordability challenges. However, the larger addressable market (82% of the total consumer broadband addressable market) will ensure the sustained higher growth rates for a longer period in MEA & ASIA regions. While the EU market will witness promising growth during 2021-2024 owing to the major contribution from the eastern region, the lower prices in NAM will only ensure the existing growth rates, i.e. 5%-10%, to hold its ground against terrestrial competition. For application-based analysis, the aggregated growth rates (Global) for enterprise VSAT is likely to remain flat. Consumer broadband is unquestionably going to be the key growth segment for the VSAT market determining success, especially for constellation players. 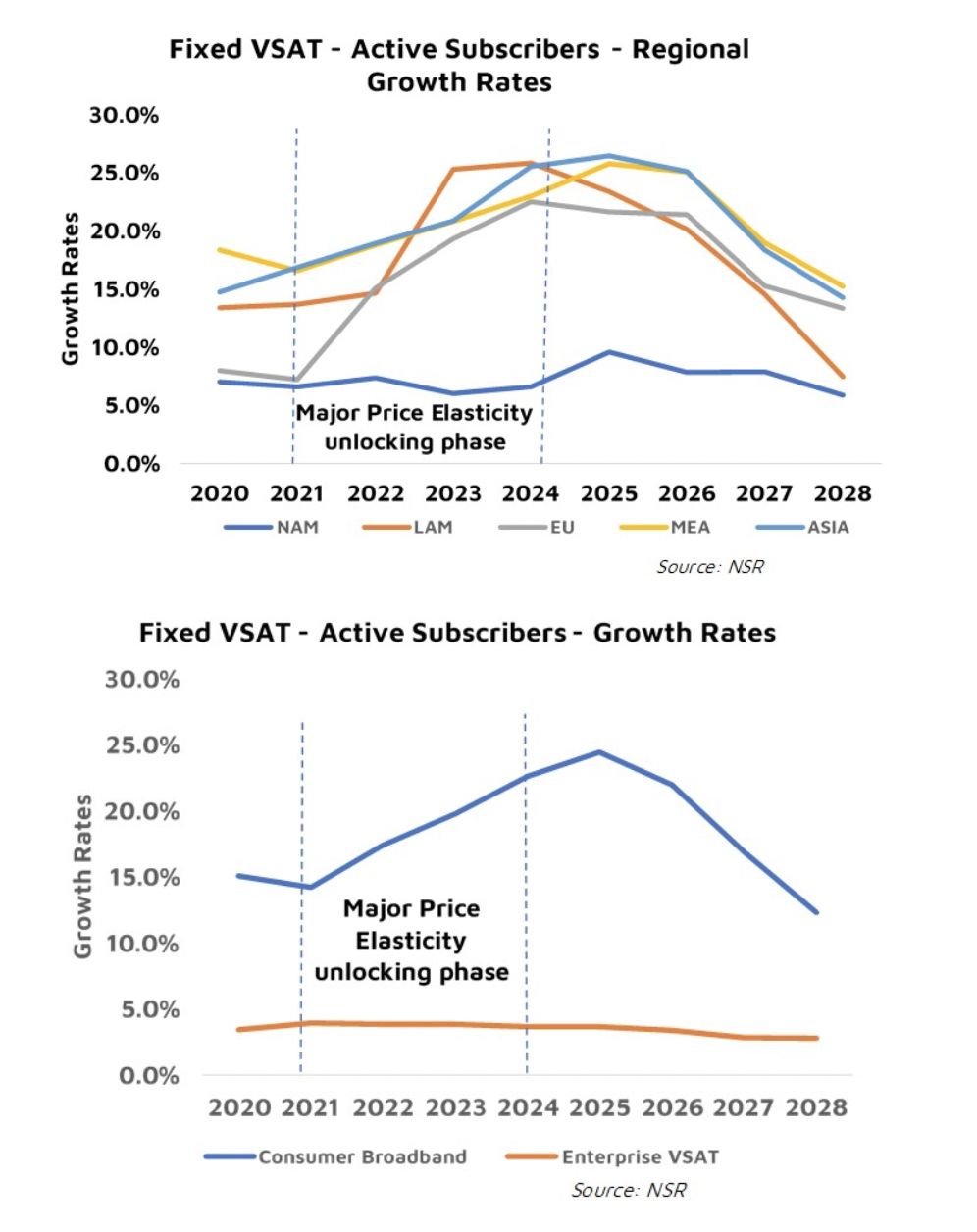 How can this Impact the Stakeholders and What is the Strategic Imperative?

The industry has already arrived at competitive capacity pricing of $200/Mbps/Month for Ka-band HTS and $300/MHz/Month for FSS wideband capacity. This new market price standard will further witness downfall and global propagation during 2021-2024, with the infusion of new capacity from non-GEO and VHTS players. The existing/conventional players will be forced to match prices to stay competitive; however, their cost will resist the price descent without investments into efficient platforms, networks and growth regions. In a recent event, Eurona, Hispasat and Avanti renegotiated the satellite capacity contract saving the Telco 9 million Euro per year – which is indicative of further downward pricing. The period 2021-2024 will most likely reshuffle the market portfolio in the VSAT segment with primarily two types of players at the end:

While fixed VSAT is likely to unlock the addressable market potential during 2021-2024, it will also challenge the existing market stakeholders, viz. satellite operators, service providers & equipment manufacturers, to stay relevant and sustainable. The period is going to be a reality check for the massive investments made in the ongoing development process for the large (global) addressable satcom markets. The strategic imperative for achieving sustainable and accelerated top line growth, is the investment in reliable and efficient space & ground systems, network and supply chain ensuring affordable, and high-speed and seamless broadband solutions.

Yet, the big question that still remains to be answered is: With price elasticities ushering in and leading to higher demand during 2021-2024, will there be enough volume to sustain growth and close the business case for ALL the new players in LEO and VHTS? For that, we must look beyond 2021-2024 but it would appear that massive investments in the $billions may lead to market exits and/or consolidation unless “all the stars align” for market players in terms of achieving: