Home > The Bottom Line > Which Direction for IFC Free Service?

Which Direction for IFC Free Service?

July 9, 2020 by Vivek Suresh Prasad | More from this Analyst | Profile

No surprises, the Global Aviation industry is in the middle of uncertainties triggered and propagated by the ongoing global health crisis. Resultantly, the industry is witnessing not-so-positive trends for the last 3-5 months including slimmed operations, lay-offs, market exits and survival challenges. While most of the aviation industry is treading water in the ongoing travel deterrence scenario by focusing on reducing cost, players such as Delta Airlines (announced the free In-Flight Connectivity (IFC) service across its fleet in Pre-COVID19 environment) are moving ahead with their IFC plan through service diversification and changes in the business model. Hence, it is imperative to ask a few questions – Why Now? What will be the cost of “Free” Service and who pays for it? What is the right business model for execution? Is it just a “Sign of the times” or a “Sea Change”?

In the last few years, the IFC market has moved from IFC 1.0 – Basic ATG Network to IFC 2.0 – Ubiquitous connection with lower focus on throughput. Now, it is transitioning to IFC 3.0 with a step increase in throughput demand with the free service model being a core driver. And this transition is not halted amidst all the challenges that the airlines are currently facing, primarily due to:

As a result, the industry is witnessing increased transition towards Airlines having greater control towards service offerings, network management and/or partnership with a third party. According to NSR’s Aeronautical Satcom Markets, 8th Edition report, 43% of the total number of IFC offering airlines cumulating to 31% of all aircraft now use an Airline-directed business model. In the Airline-directed model, passengers buy directly from the Airlines, which in turn pays to the service providers as per the connectivity contract. Asia has the greatest number of airlines with an Airline-directed business model whereas NAM tops the list by number of connected aircraft with 900+ on this model. But it is worth noting that NAM also witnessed a large jump in the number of connected aircraft using a Hybrid model with 1,500+ connected aircraft. Typically, a third party is involved in this model in addition to the airlines and service providers like Amazon, Netflix, and Apple – which result in the subsidized or marked down cost of service. Moving forward, an increased transition is expected towards airline-directed and hybrid business models, as the industry vectors closer to IFC 3.0, especially with the aspiration of free IFC service.

The next question is, for the IFC service, which is currently expensive now is free for passengers, who pays for it and what is likely to be the cost of the service?

Currently/typically, airlines with IFC offer free messaging and free limited surfing to passengers where data access fees range anywhere between $5-$50 depending on the packages such as 1-trip, 1-hour, 24-hour or 1-month plans. With the gradual infusion of the free-service model, NSR estimates the average take rates and bandwidth demand per in-service unit to ramp by ~3x to ~6.5x during the 2019-2029 period, resulting in year-on-year revision in the ARPU values (i.e. revenue for service providers = cost of service for airlines). 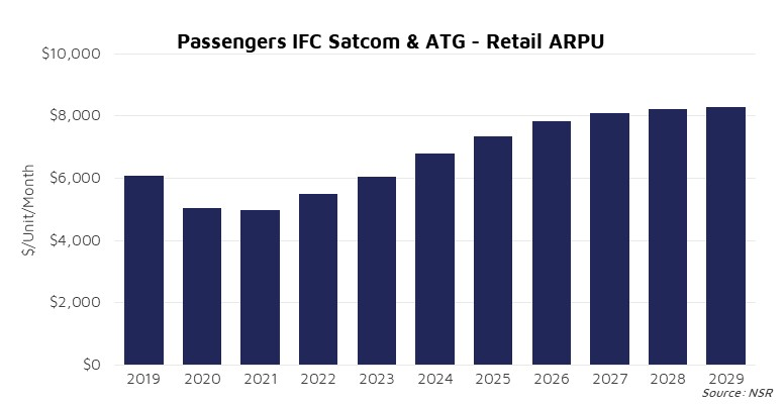 Once again, according to the NSR’s Aeronautical Satcom Markets, 8th Edition report, Passenger IFC Satcom & ATG ARPU is forecasted to grow from $6,000+ to $8,200+ at CAGR 3.1% averaged across frequency bands, airframes & regions. Clearly, the ARPU growth rate is not proportionate to the ramp-up in bandwidth demand due to the expected decline in capacity and service pricing brought forth by increased supply and competition. This means keeping a check on the connectivity cost for airlines and thus creating a favorable environment for the free service model.

But despite the favorable environment, the free service model is still an expensive aspiration. NSR expects the transition around the free-service model to be limited during 2019-2029 with the following options (may or may not overlap) for bearing the cost of service across different airlines and regions:

The IFC market is transitioning to IFC 3.0, and the transition rate will be accelerated by the ongoing market scenario. Airlines have increased bargaining power and need to continue to capture a larger market share. Primarily, this will be through extended value offerings such as IFC rollouts and the ‘Free model.’ Hence, the continued focus on IFC can be considered a “sign of the times”.

At the same time, it is also the right time to initiate IFC execution to stay ahead of the curve as the execution lead time is likely to be around 12 to 18 months in line with IFC’s market recovery and growth timelines. In terms of business model and bearing the cost of service, the industry is likely to witness a mixed bag of trends, with airline-directed and hybrid business models being the top choices of the industry. In long term, the fundamentals of capacity demand growth resulting in increased ARPU for the industry remain strong, led by the free service model. The emphasis across vendors and end-users on an efficient network, system and pricing is more than ever propelled by the COVID19 scenario. Overall, this will lead to a long term sustained “Sea Change” for the IFC market.