HAPs – Eye in the Sky

January 9, 2020 by Shivaprakash Muruganandham | More from this Analyst | Profile

Technological and regulatory progress has greatly expanded the remote sensing/Earth Observation (EO) market. However, significant tradeoffs continue to exist in current earth imaging solutions: EO satellites and constellations can provide wide area coverage but are susceptible to cloud cover and are usually at lower resolutions (with HR being relatively infrequent). On the other hand, drones and manned aircraft offer higher resolutions, but coverage areas are an order of magnitude lower. 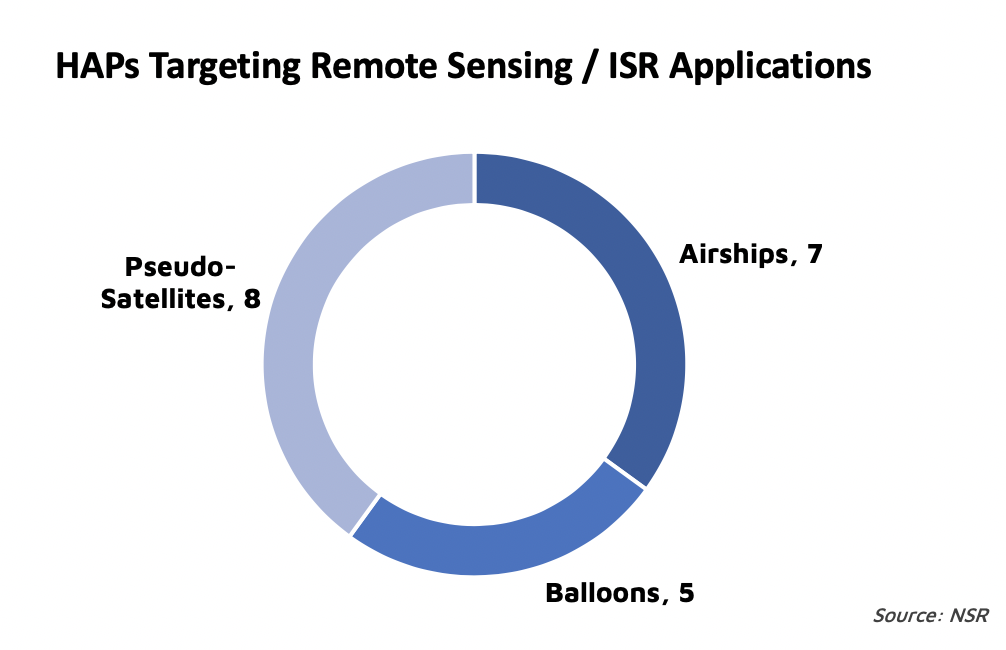 NSR’s High Altitude Platforms, 3rd Edition report presented a 10% CAGR through the coming decade for manufacturing and service revenues in the HAPs market, with communications and remote sensing being the leading applications. While still a small and fragmented market, balloons, pseudo-satellites and airships are expected to serve as a complement to the existing satellite EO industry in the future. Moreover, higher demand for low latency and increased coverage has many EO service providers eyeing a variety of downstream applications, ranging from commercial maritime and financial services sectors to ISR and geospatial intelligence.

It is well established that the cost of HAPs launches is a fraction of that of a satellite today. Platforms such as Airbus’ solar-powered Zephyr deliver wide area monitoring, without flight endurance concerns due to fuel capacities. Improved battery technology will be essential for such a platform to reach wider commercial viability, with a need for higher production volume and energy density of solar cells: Airbus’ investment in Amprius is the most recent of deals made towards this effort. NSR previously contended that HALE/MALE aircraft systems with their long endurance capabilities are a potential game-changer for commercial operations. The relatively well-developed HALE UAS market now has players such as General Atomics looking into the development of BVLOS operations. Ordnance Survey’s Astigan in the UK is yet another program expected to drive the market for ISR and remote sensing services via pseudo-satellites, leveraging the mapping agency’s expertise in the geospatial sector.

ISR applications are generally characterized by a need for persistent, long-term surveillance over a region of interest, an application well suited for lighter-than-air (LTA) vehicles such as airships and balloons. Following a $26.5M funding round in 2018, WorldView Aerospace accelerated development over the last year on its un-crewed Stratollite platform, towards real-time intelligence with improved station-keeping capabilities. It aims to provide an affordable solution for long endurance, long-dwell EO missions, overcoming problems of cloud cover and spatial resolution that otherwise hinder satellite/aerial image acquisition.

Despite more players taking note of the potential for high altitude imaging, this is far from being a crowded market. No more than 20 HAPs programs currently target remote sensing / ISR applications, with many of them still in early stages of development. Near Space Labs recently launched API access to its HR repository of images obtained via payloads on stratospheric balloons, positioning itself as a service provider with a particular focus on the infrastructure, insurance and urban logistics market.

Stratospheric balloon tests for Gov/Mil applications are already underway: Sierra Nevada Corporation’s FCC filing last year revealed a program to conduct wide-area surveillance to thwart narcotics trafficking and homeland security threats. In addition to concerns regarding susceptibility of such balloons to stratospheric winds and of structural integrity and battery efficiency in pseudo-satellites, regulatory oversight will be a key element to be addressed if high altitude imaging is to compete with existing solutions: persistent HR monitoring from the skies give rise to privacy issues the laws around which are yet to be fully developed.

The satellite EO industry that traditionally consisted of only a few satellite operators catering to Gov/Mil customers has now diversified greatly, owing to improved launch, sensor and processing capabilities, and this expansion is expected to continue. Unmanned Aerial Systems (UAS) have risen rapidly as a cost-effective tool for commercial imaging requirements, especially in regions with a premium client base.

HAPs promise to fly in the gap between aircraft and spacecraft and overcome the disadvantages of either to provide affordable, persistent high-resolution EO capabilities over large areas. Nevertheless, significant challenges remain before the HAPs EO/remote sensing market can really take off, and the establishment of a robust regulatory environment will be critical here for further development.